About a year ago I played my last game of golf. I haven’t played since then, though I did have a lesson with a coach. I had developed a horrible swing and didn’t know where it had come from. The coach gave me some drills to do, so get rid of the swing error. I did these, with enthusiasm and energy. And then, I couldn’t more because of the pain in my shoulder. Here we are, one year on and I’ve had an arthroscopy on my shoulder to remove scar tissue and resurface the joint.

Today is day four after surgery. I am still in pain, but I have pain meds to deal with that. I’m already thinking about when I will be able to get on the golf course again. When will I be able to pick up a club? And how long will it take me to recover my handicap? It’s all a little bit premature, as right now I can’t even move the shoulder beyond a slight back and forth motion (exercises from the physio therapist). But, I am looking forward to standing on the first tee at our golf club.

I’ve been looking online for any blogs or information about playing golf again after this type of surgery and so far I have found nothing.

I will recount my experiences here…though it may be some months before there is a conclusion.

The cause of my problems? Unknown. Given the amount of ‘gunk’ that my consultant removed from my shoulder, it could have been quite some time. I had shoulder problems as a kid – lots of pain and lumpy, knotty shoulders. I did lots of distance swimming, played violin, and played an instrument called a bell lyre (standing for hours on end holding it with my left hand), and golf, lots of golf. I think I became aware of an issue when my swing became ‘weird’. It was all downhill from there.

Getting to surgery wasn’t what I expected, though that’s what the first physio therapist told me was a certainty. I went on to have a cortisone injection and more physio, but the pain increased. And so, here we are.

I’ve played very little golf this year. Not through any choices I have made, but on medical grounds. It’s been a strange year as a result. I went to Wentworth and saw Luke Donald putt for victory on the 18th. And, I, like many of us watched from the edge of our sofa as Europe held on to the Ryder Cup. But, I didn’t play. I had a couple of hospital procedures and lots of physio.

It’s now dark at 4:30pm. It’s cold. It’s windy and it has been raining a lot. That means Winter rules. At our local 9-hole pay-to-play, that also means Winter tees. (A raised platform with fake grass and a fixed place for your tee). Even so, I want to play. I want to get my clubs out of the garage, along with the Go Kart that has seen little action this year and play 9-holes.

I suspect I will be awful. My shoulder is still very ‘tight’. I won’t have much success. But that won’t matter. I’ll be playing again.

Only, I know I have work to do before I can get on the course again. I need to be fitter than I am. I need to increase the mobility in my shoulders. I have to work on increasing my overall flexibility. And, I have to go visit the Pro at the local course as I suspect I have been compensating for a dodgy shoulder for too long… How does one learn a new golf swing and ‘unlearn’ bad habits?

Answers on a postcard, please? 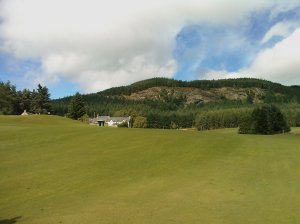 From the second tee...

What a different experience of playing a “short course”. Hmmm. The first three holes are not only a test of your golf skills but of your fitness levels. As you stand on the first tee, little do you  realise as you look up the hill that you’re actually heading up…up…and up again.

The 5th is a challenge…at first it looks like a straightfoward hole until you realise that the pin is about 30ft above you on a raised platform… The elevated 6th tee has amazing views of the valley below, the Atholl Palace hotel and the rest of the hole. And it’s pretty much the same as your round progresses – stunning views, uncompromising golf, and immaculate grounds. Advice from the locals – push on through the first three holes to settle into an easier pace on the way around and always take a club longer than you think you need…

Golf buggies are not allowed on the course as it’s too steep! But, if you have a Powakaddy or something similar, it’s definitely worth the effort to take it! If not, speak to Mark (the Pro) in the shop and hire one of those on offer.

Stop for a bite to eat at the restaurant and enjoy the views of the first tee and the 18th hole as you do. Spectacular golf course! Challenging golf!

Don’t think about this one too much. Watch it for a laugh, without BF in tow. It’s a chick flick. A good laugh for an hour or so. The main character – Juno – is very funny. I look forward to seeing the actress take on different roles in the future.

Katherine Heigl in another chickflick/comedy about a girl who is always the bridesmaid and never the bride. A very predictable storyline unfolds as the film prgresses. Like the earlier film, it’s a chick flick (sense a theme here…?). Another where you leave the BF at home, disengage brain, and just laugh.

Kostner & Russo in a movie about playing golf. It’s worth watching for a laugh, to see Kostner hit those shots, to see the familiar golf pros of today, as fresh-faced golfers of yesterday and because…yes, just because.

A Little Tag or Two